At the height of absinthe’s popularity on through to its eventual banishment, the drink was considered both a miracle tonic and a criminal scourge, depending on your perspective. While little of the alleged psychoactive or hallucinatory aspects of absinthe have been explained by science, what we do know is that the drink touched the lives and influenced the work of many an artist, writer, and intellectual. Below you’ll find a list of the major absinthe aficionados in whose life and work were inspired to take up pen or paintbrush thanks to The Green Lady. 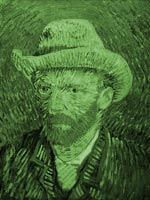 Van Gogh’s love affair with absinthe is considered to be he most famed in history.
It is rumored that not only did Van Gogh enjoy absinthe to the extreme, but that he also devoured the oils and turpentines used in his paintings. Speculation about the odd lighting effects in Van Gogh’s work is sometimes attributed to a case of epilepsy. Accurate medical diagnoses of Van Gogh’s various conditions is unavailable, but Van Gogh scholars tend to agree that he displayed, not only in his work but also in his letters, all the signs of a full-blown absinthe alcoholic. What we can say for sure about Van Gogh is limited to this: that he was as exceptionally troubled as he was brilliant. 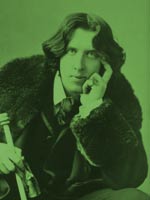 One of the English language’s most quotable writers, Wilde was a professed alcoholic and devotee of absinthe. Wilde’s stage plays, poems, and short stories gained him celebrity status not only in his native Ireland but also in Continental Europe. From his post as foremost writer of his day, Wilde referred often to absinthe as a boost to the creative process. One of Wilde’s most famous quips about absinthe speaks to his love of tragic irony, and goes as follows: “After the first glass of absinthe you see things as you wish they were. After the second, you see things as they are not. Finally, you see things as they really are, and that is the most horrible thing in the world.” 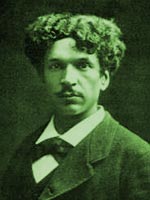 Charles Cros was a renaissance man: painter, poet, physicist, chemist, musician, and inventor. The Frenchman is said to have invented an early model of the phonograph, though he lacked the funds to secure a patent or production facility. Cros’ use of absinthe is notorious. He regularly drank up to 20 absinthes a day, and was known to regulars at Paris’ legendary absinthe cafés as a bon vivant, partying long into the next day. Whether Cros’ work was heightened or hindered by absinthe is somewhat irrelevant, due to the many accomplishments he enjoyed in his life. 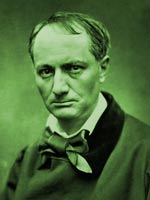 The man who all but defined artistic decadence, Baudelaire’s best known work includes a poem entitled “Get Drunk!” that mentions the use of absinthe. Baudelaire’s main accomplishments are in the fields of poetry and art criticism, but he also wrote thoroughly emotional political tracts, dramas, and novellas. Baudelaire’s life was an extravagant one: he lived well beyond his means and drank far beyond the capacity of his body and pocketbook. For Baudelaire, trips to the poorhouse were followed up by trips to the café. He eventually died, young even by 19th Century standards, due to a combination of seizure and the ravages done to the writer’s body by his regular use of laudanum, opium, and drink. 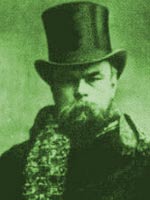 Art-school staple, poet Verlaine is said to have drank himself to death and damned his drink of choice, beloved absinthe, from the death-bed. Verlaine’s troubled sexuality and substance abuse are the stuff of legend – in a rare meeting of the minds, Verlaine and fellow poet Arthur Rimbaud shared a bed for some time – and his devotion to absinthe was apparently unconditional, as he wrote extensively about the virtues of the drink. Through the lean and mean times of his later years, Verlaine kicked all other habits but absinthe. In a twist befitting the content of his work, Verlaine damned the very drink that many claim did him in – while sneaking kisses of la fee verte from his death-bed. 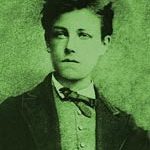 The young, talented poet Rimbaud fell in love with fellow poet Verlaine soon after his arrival in Paris. Rimbaud also developed a parallel fondness for Verlaine’s drink of choice: absinthe. His artistic life ended as abruptly as his relationship with Verlaine. The story goes that Verlaine, in a fit of madness, shot the young Rimbaud, and the two parted ways forever after. Verlaine went in and out of poorhouses while Rimbaud gave up writing, absinthe, and the bohemian life for the military. 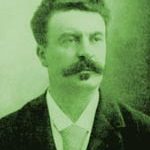 Considered by scholars to be the father of the modern short story, Guy de Maupassant was a French writer known for efficient prose and a style that championed brevity above all, much like a later writer and absinthe devotee, Ernest Hemingway. In de Maupassant’s “A Queer Night in Paris,” the writer describes the sensations associated with absinthe in the streets of Paris. 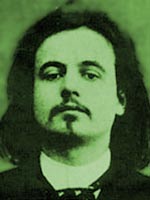 An eccentric author with exotic tastes, Jarry’s landmark work is the French absurdist play, Ubu Roi. Jarry’s use of absinthe and its relationship to his work is renowned: Jarry is said to have been one of, we can only presume, very few absinthe devotees of the time who drank the stuff straight, foregoing the traditional combination with water and sugar. Jarry’s Ubu Roi, and its foul feature, the character Pere Ubu, have long been used to solidify arguments that regular absinthe use will drive a person to insanity. Jarry saw it another way. His professed goal was to use absinthe to “fuse together the dream and reality, art and lifestyle.”

Hemingway and absinthe make for a direct correlation in the minds of readers in the 20th Century and today. Absinthe features prominently in much of Hemingway’s work, including: For Whom The Bell Tolls, where the protagonist turns to absinthe as a substitute for the poor quality of the local liquors; The Sun Also Rises, about a sojourn to Spain in which Pernod is the drink of choice for the traveling party; and the short story, “Hills Like White Elephants,” where abortion is considered over drinks of absinthe at a train depot. Hemingway’s famed use of absinthe comes as a bit of a puzzle, due to the fact that it was banned in much of the Western world when he was in his teenage years, but the likely case is that he was able to stock up on trips to Cuba and Spain, where he famously participated in the running of the bulls. 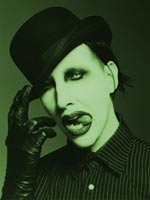 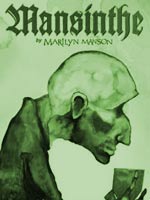 A uniquely American celebrity, Marilyn Manson is by far today’s most famous absinthe devotee. The musician and artist known for his grotesque stage persona – inspired, in part, by Jarry’s Pere Ubu character – has claimed absinthe, in addition to the exhaustive use of illicit drugs, to be an influence on his creative process. Manson’s love for absinthe is so strong that, thanks to the recently loosened restrictions on the production and distribution of the drink, he has gone on to develop his own brand, Mansinthe. Manson’s brand of absinthe is available in the United States, and in 2008 Mansinthe won the Gold Medal at the San Francisco World Spirits Competition.